Cooking a boned chicken gives bragging rights.  The nasty little secret’s that it’s not that hard.  The only tough part is getting the bird off its cooking rack and onto a cutting board without splitting the skin.  This recipe also works well with duck.

Prepare marinade by mixing ingredients in a medium bowl.  Thoroughly coat the chicken and let sit for an hour at room temperature.   Use this time to prepare the vegetable stuffing. 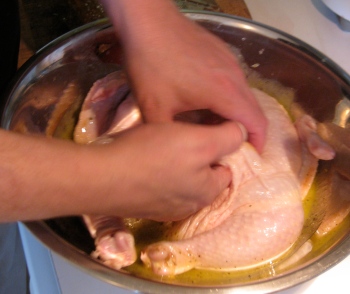 coat the inside with marinade

For the stuffing, melt butter over medium low heat.  Add vegetables, cover and simmer for 10 minutes or until onions start becoming translucent.  Cool for 10 minutes, then combine with ricotta, oregano, parmesan, egg yolk, and ﻿salt and pepper﻿.  Let  the mixture sit for 10 minutes to thicken, then move on to the next step. 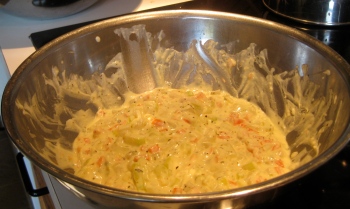 Remove the chicken from the marinade and place breast-up.  Use a skewer to close off the neck, folding the skin inward for an attractive seam and tie with twine. 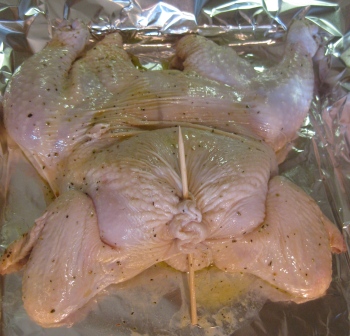 Lift the back end of the bird and spoon in stuffing.  Keep bird elevated to ensure that stuffing makes it’s way to the front of the breast.  Then close off the base with a skewer and tie.  Do not pack stuffing into the bird.  Its meat will contract during cooking and all stuffing has a tendency to expand.  Too much will split the skin.

Join the drumsticks with a third skewer and tie them with twine.  Then place the bird on a rack in a baking pan.

Put into a 325 oF oven.  Baste every twenty minutes with left over marinade and pan drippings.  The bird is done when the skin browns and the thigh juices run clear, up to two hours depending on the size of the bird.  Let sit for 20 minutes before moving to a cutting surface. 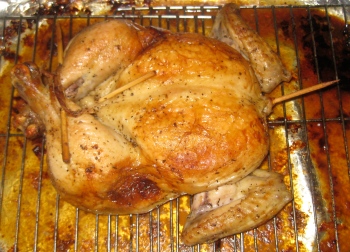 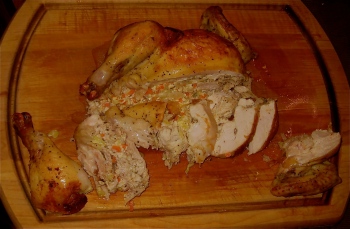 One footnote….  If you’re using bamboo skewers remember to soak them in water for at least a half hour.  This will keep them from burning in the oven.

Pairings:  This is big food, so it can get along with only a green salad.  Traditionalists will insist on mashed potatoes, which is a good idea if you’re increasing the guest list by an additional 2.  And with potatoes you can add a gravy finished with the pan drippings.  And up the guest count another 2.  For wine, this goes well with a mild white (like a pino grigio) or a sweet white (like a riesling).

One response to “Boned Whole Chicken with Vegetable Stuffing”